In the Musee D’Orsay, home of the world’s greatest collection of impressionistic art, hundreds of people cluster close to the famous paintings by Monet, Manet, Degas, Van Gogh, etc. Rather than actually looking at the paintings, a surprising number of them pause only long enough to take a photo on their phone or ipad before moving on to the next one. The desire, it seems, is not to actually experience the painting but to possess it in some way.

The Euro 2016 Soccer Championships are being held in France. Twenty-four teams from Iceland to Turkey are competing in ten venues throughout the country. The games begin the day we arrive. Crowds of fans have come from all over Europe, the Swedes in their bright yellow, the Irish in their bright green, the Croatians in red and white check are drinking beer at outside tables, chanting and singing songs. My God, we realize, the Irish over there are singing “Amazing Grace!”

At Sacre Coeur at the top of Montmartre on Sunday morning the seats are all taken during mass. A chorus of nuns in white with black trim sing while priests in green and white robes perform the liturgy of Eucharist and the congregation stands and sits and kneels oblivious to the thick stream of tourists who are entering through the doors on the left, passing slowly counter-clockwise around and behind the ceremony snapping photos before exiting through the doors on the right.

Descending from Montmartre we find a building where Vincent Van Gogh lived with his brother Theo for a couple of years in the 1880s. Hoping to find a painting he may have forgotten in a corner, I knock on the huge blue door. No one answers but as I am standing there a woman comes up the street. She pulls out a key, opens the door, smiles at the old kook standing beside her, goes inside, closes and locks the door.

Hundreds of locals ride the ubiquitous gray-brown rental bikes that you can pick up and leave off at many convenient locations. There are traffic lights for bicycles and everyone seems to obey the rules.

Seated at an outside table on rue Montorqueil having a class of wine while enjoying the passing scene we note particularly the two ladies sitting a couple of tables away smoking cigarettes, drinking wine and looking tres chic with their nifty scarves. How Parisian they are! When we finely get up to leave one of them asks, “So, where y’all from?” They being from North Carolina and Virginia.

On the pedestrian-only Pont des Arts amid a group of striking metallic sculptures set on long pallets a man is playing the classic shell game. He throws a cloth on the pavement, squats down with three shells one of which has a bean beneath it. A crowd of men and women gather. He moves the shells around very quickly and as I watch I can see how he deftly moves the bean from one shell to the other. When he stops, men place a foot on the shell they think contains the bean. They bet and lose. But from my angle I can tell which shell holds the bean. Suddenly the man looks over at me. He hands me a fifty Euro note and asks me to bet. A woman in the group yells with broken English, “Show your money!” The other gamblers are watching me. I realize now that I am the mark. To get me into the game, the man has been deliberately showing me which shell has the bean. Just then a police car pulls up at the corner. The man grabs back the fifty Euros, scoops up his cloth, his shells and his bean and disappears into the crowd. Moments later he is at work again halfway across the bridge.

At the Church of St. Eustache on Saturday evening, we attend a concert put on by the Iranian immigrant community. An orchestra and choir made up of Iranian and native Parisian students perform newly composed Iranian music to a packed house. Between the numbers long speeches are given that are unintelligible to us. Outside, at the back of the church we notice some construction going on in the middle of the street. Early the next morning when we walk back, we find a street market in full bloom with breads, vegetables, fruits, cheeses and long tables stacked with fish and other seafood. We buy olives, tomatoes, berries, cheese.

Everywhere we went in Europe the tap water was drinkable, though in many places the restaurants sell mineral water as a matter of course. Parisians, by contrast, are proud of their tap water. At one restaurant it is delivered to our table in a fancy carafe with a fancy label on which the following words are written: “Les Eaux Municipales”

One of the reasons we extended our trip to Paris was that we hoped to reconnect with Anne Muniesa. In the early nineties when she was seventeen Anne had been a Rotary exchange student in Southern Humboldt, and had lived with us for several months. Our family visited her and her parents in Chantilly in 1998. Nina and Ahry saw them again the following year. Anne completed her education, started working in Paris, got married and had a daughter, Salome, who Nina had a chance to meet 2009. Then we lost touch.

So, our first morning in Paris we set off in search of Anne. At last contact she had been working at Les Invalides, the hospital for injured veterans established by Louis XIV in 1670 which now houses the Army Museum, Napoleon’s tomb, etc., but still serves as a hospital and home for injured and aged veterans. It took us an hour and a half to walk there but since our route was along the Seine we had much to enjoy along the way.

It was a Saturday and the offices of the hospital administration were closed but the museum was open. A woman working there went through the records on her computer. No Anne Muniesa showed up and we could not remember Anne’s married name. However, there was an Anne who worked as marketing director for the museum. Our Anne had been in public relations so we assumed this was the same Anne. The museum lady allowed to Nina call and leave a message on Anne’s office phone and to send an email to her office email address. The messages said: We will be back on Monday morning and we hope to see you.

Monday morning we walked back to Les Invalides. The lady working there put us through to Anne. This Anne had been very confused by the phone call and the email. She was not our Anne. “Well,” she asked, “who exactly are you looking for?” “Anne Muniesa.” “Oh,” she said, “I know Anne Muniesa. Let me connect you.”

Moments later “our” Anne came running through the door. A captain in the French Army she was in full uniform and still living at Les Invalides with her daughter and husband. She continues to work on the hospital side of the operation which is why her name did not appear on the museum roster.

That night, our last night in Paris, we enjoy a fine meal with Anne and Salome at a restaurant near our apartment. It feels like a family reunion. Salome is ten years old, only seven years younger than Anne was when she came to live with us.

Our apartment is on rue Bachaumont (a “man of letters” the sign says of M. Bachaumont who lived from 1690-1771). The apartment is on the seventh floor, one-hundred and twenty-two spiraling stairs above the ground. As we return from our dinner with Anne and Salome we discover that the little elevator has been closed for inspection and is not working. Up the stairs we go and the next morning at six-thirty we are going back down the stairs, this time with our luggage.

Our flight leaves at ten. Anne had telephoned the night before and scheduled a taxi to pick us up at seven. We find rue Bachaumont virtually deserted. At the corner the sidewalks are piled high with garbage and empty bottles. No cars, no bikes. A woman walks by with an umbrella. Outside the raw-food restaurant, a man washes down a stretch of sidewalk. A taxi comes down the street. Its red lights are on meaning it is not available and it passes without stopping. The morning is damp and quiet. The metro workers are on strike. We have no phone. We don’t speak French. If that taxi doesn’t show up, I’m thinking, we are screwed.

At ten before seven a black Mercedes comes around the corner. It is a taxi and its red lights are also lit. But this taxi stops in front of us. A Chinese man wearing a charcoal suit, a white shirt and tie gets out and smiles a greeting. On the road to the airport we try to speak with him but it’s not easy. There are only a few words we have in common. But he knows of California. The Chinatown in San Francisco, he tells us is, “very famous, very famous.”

At a stoplight he manages to explain that at night the corner where we wait is the most dangerous in Paris. But now, he assures us, it is “safe. Very safe.”
HOME FROM THE MARKET: 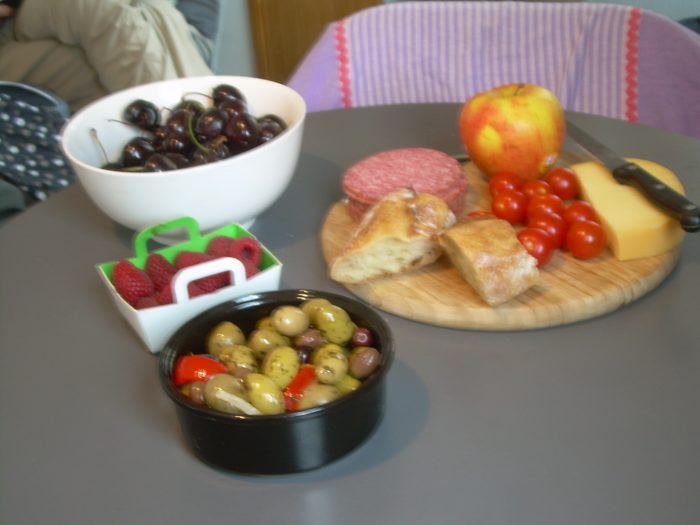 5 Responses to SCENES FROM PARIS