Tell me a good story and I’m enthralled. I love watching them in movies, seeing them in plays, reading them in newspapers, magazines and books. I even enjoy the stories found in comic strips, as you can see from the painting where Frank Cieriorka captured me reading them almost thirty years ago.

For me literature, that is to say the collection of stories old and new that we invent and tell each other, is the record of humanity’s great conversation. In this conversation we tell ourselves who we are.

One of the unique qualities of this conversation is that it exists outside of time. Imagine a huge round table. Seated at the table are all the writers and story tellers. Ann Patchett and Stephen King are there, but so are Virginia Woolf and Leo Tolstoy. Gabriel Garcia Márquez is there along with Mark Twain and William Shakespeare. A great conversation is going on and beside each writer is an empty chair where you are free to sit and listen. 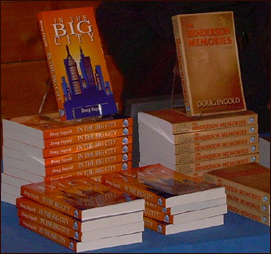 Doug Ingold's novels, In The Big City and Henderson Memories

There’s a man seated at the table whose bones had already turned to dust two thousand years before we were born. But we can pick up a copy of The Iliad and Homer will speak to us. He will tell how after ten years of war Priam, an old man and a great king, his heart filled with despair, leaves his home behind the battlements of Troy and sets out across the battlefield accompanied only by his driver and the god Hermes until finally he arrives at the lodge of the mighty Achilles. Night has come. Achilles is the man who has killed his son Hector and who for the past several days in a frightful rage has dragged Hector’s body behind his chariot around and around in the dirt. At that moment even the god leaves Priam and he is alone when he enters the lodge and sees his enemy across the room. As Homer speaks it will seem as though we, too, are in the room with these men. His voice will be as fresh and alive as the text message that just landed on your cell phone.

Since I was eighteen my passion has been to participate in this conversation that we call literature. In the pages of this website you will be introduced to some of the stories I have written, to my modest and humble contribution to the Great Conversation. Thanks for stopping by.

Check out my latest stories.

Our former President is again stirring up his followers. He accuses those “racists” investigating him of being on a witch hunt.    I did considerable research about witch hunts as I was writing my novel THERE CAME A CONTAGION. The “contagion” in the title refers to an eruption of mass hysteria that resulted in more than three hundred people being hunted down and murdered as witches in the Territory of Trier in the 1580s and 90s.       It … Continue reading →