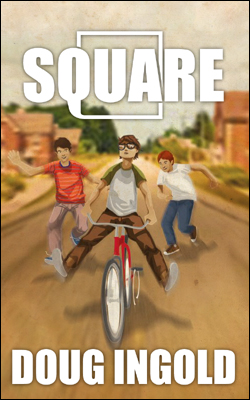 In this coming of age novel thirteen year-old Tim Holter tells you about his day. In his small Midwestern town a bartender has killed himself. A boy’s new bicycle has been trashed and the boy’s big brother intends to find out who did it. Before noon Mrs. Plummer will stand stark naked in Matsen’s Bakery and Tim will meet a pretty classmate under less than ideal circumstances. After lunch Mr. Schwartzentraub will introduce Tim and his friends to a mysterious chemical compound that has far more uses than Mr. Schwartzentraub could have imagined. And that evening, as the Square fills for a band concert, the boys will set forth on a mission of revenge that leaves everyone, even Officer Burkholtz, with a lot to think about.

What follows is an excerpt from SQUARE.

Copyright 2013 by Douglas A. Ingold

Like I said, Somner, me and Trauber been together since first grade. I don’t remember Somner from first grade. He was there, but he was in the other class. Some years all three of us was in the same class. Other years I was better friends with one than the other. In fourth grade they were both in Mrs. Newman’s class and I had Miss. Rich. Miss. Rich was about a hundred but she was a nice lady. She’d been my mom’s teacher in fourth grade. She wrote a note on my report card at the end of the year. The note said I could do better than I did.

Seventh grade was hard but fun. Before that we and the girls did the same things. Now the girls had home economics and we had wood shop. We made things with power saws, drills and sanders. I made a tie rack for my dad.

Another thing was recess didn’t happen anymore. We had gym last year instead. There’s a gym class for boys and another one for girls. In the fall we played softball or flag football, in the winter basketball, in the spring track and field. On rainy days we did calisthenics. We use the boys’ locker room and have to dress for gym. Coach Paulsen made us take a shower after every class. He comes around, “Holter, you take a shower?”

One day last winter, Coach told us to not dress for gym. He made us take off our street shoes and line up on the gym floor in our socks. Coach stood on the stage. He always wears a blue sweatshirt and he’s got a whistle that’s on a lanyard round his neck.

“Okay, boys,” he said. Coach Paulsen’s voice sounds he’s talking through a bullhorn. “Listen up. In about fifteen minutes Mrs. Clendenen will be bringing the girls in here for a dance lesson.”

Hearing that my stomach got tight and I could feel it start to squirm. Some guys groaned real loud.

“The curriculum calls for dance lessons in the seventh grade, and today you’re going to learn to waltz. Even you, Bonner.”

The groans got louder and Coach Paulsen gave a blast with his whistle.

“Now put your feet together and listen up! You are facing the girl and she is facing you. You got that, Bonner?”

“If she’s on second base and I’m on home plate, I can’t touch her at all.”

“You heard me. Followed by ten pushups. And that doesn’t mean you don’t keep listening while you run. Each of you boys is going to dance the waltz today with a girl and if you don’t want to look like a fool, you better listen up. And that means you too, Carter.”

“Where you standing, Bonner.”

“Right hand is on the waist. Left hand is holding her right. What level?”

“At the shoulder, Coach.”

“That’s right, Somner. Straighten your back, Graham. That one does not count. Still got ten to go. Shout out those laps, Carter. If I don’t hear em you keep runnin em.”

“Okay, now, everybody. Feet together. Put your hands out in the approximate position they would be in if the girls were here. Now, before I put the music on, we are going to go through the steps. In the waltz the rhythm is in threes. One, two, three, one, two, three. So, that’s all there is to it. Three simple steps.

“Where you standing now, Schwartzentraub?”

“Good, so everybody look at your feet. They should be together. Now, Holter, where’s the girl?”

“He’s standing on her, Coach.”

“That’s right, Bonner! He would be standing on her if she wasn’t dancing too. But she’s been doing the mirror image of what you been doing. When you go forward, she goes back. When you go back, she goes forward. So, where’s the girl, Holter?”

“I hope not, Holter. I hope she’s in centerfield otherwise you’ve dropped the ball somewhere.”

“We have returned to home plate, Coach.”

“She has returned to second base, Coach.”

“You start over. Got that Carter?”

“You could think of it that way, Schwartzentraub.”

I had to dance with Karen Willis. She’s about six inches taller’n me and she kept looking down at my socks. I think she was looking at them cause they were kind of dirty. That’s because I’d already been out checking the trap line that morning and I always wore big old boots when I went out there. She was kinda pushing me around while we danced. Her feet were bigger’n mine and I had to be real careful not to step on them all the time.

Available from the author, and from various Humboldt County bookstores including: King Range Books, Northtown, Booklegger and Eureka Books.

Both physical and ebook editions can be ordered from Amazon.com.

Or search under books for Doug Ingold