Rosyland: A Novel in III Acts 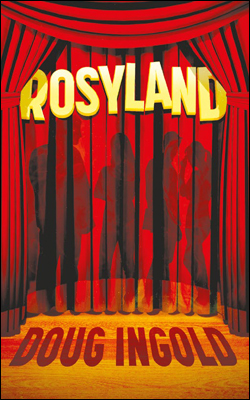 Two actors commit adultery, a rogue cop torments a criminal, a lawyer and a costume designer feel betrayed, two mothers worry about their daughters. And festering beneath the surface is one man’s craving for revenge. As children Elisa and Janet were neighbors and best friends. Today only one thing connects them: the hatred one father has for the other.

“Ingold’s narrative is laid out like a movie or stage play, and its shifts from scene to scene are effortless. He maintains the easy flow of each character’s separate plotline until they all tie neatly together….A skillfully written novel with plenty of intrigue, plot twists, and romance.”

Below are the novel’s opening pages.

If asked she’d say Buddhist. Like that time in Corvallis when Rafe had a chance to play Puck in a summer stock production. They were still in school then, living together but not yet married. The director, one of Rafe’s profs, had gotten him the part and a stipend, enough to cover their room and board if the room was small and the board slim. She’d done stitching that summer gratis. So they were in the office of a property management company looking for a place to rent and the guy they were talking to had that fresh-scrubbed, newly-converted, evangelical look. He was going on about the different parts of town and where they wanted to be and to figure it out had asked what church they belonged to.So she had said, “Well, I’m Buddhist.” Meaning not so much that she was Buddhist but that this guy was a jerk to ask such a personal question, thinking later she should have said, “Islamist, creep, and where do you live?”

Then later after they were married and working with the company in Oregonia, Jehovah’s Witnesses started coming to their door unannounced. She, thinking she’d get them to stop, explained that she was Buddhist. Big mistake. The very next day they were back. The same two, only the two of them standing back now, sending a young Hispanic girl to tap on her door and hand her a tract on sorcery and cults, as if Buddhism was one of the two or both. Every couple of days a new recruit with a shy smile handing her a pamphlet about devil worship, or some such. Rafe said she’d become their blocking dummy. Count on Rafe to come up with a sports metaphor.

So, she was a Buddhist. Not a saffron-robes, begging-bowl Buddhist. Buddhist, meaning she believed…well, what’s there to believe, really? There was a word she heard her grandmother use once in reference to a glass of sherry, that it was her “restorative.” Buddhism was Elisa’s restorative. She lived her life along the axis of justice. Actions were right or wrong, fair or unfair. Not just her actions but everyone’s. They made life better or they made it worse. Newscasts were dramas for Elisa; the world was in constant flux ever in danger of sliding off the dark edge. So she sat zazen three mornings a week with a small group at the house of a woman friend to give herself some perspective, some stillness at the center. And that made her, if she could be said to be anything, Buddhist. And being Buddhist made her vegan, though she might have an egg now and then, and resisting a piece of cheese was always a challenge. But vegan, mostly. Where was the integrity, she thought, in sitting zazen and chewing on a cow? Which meant cooking two meals most nights, one for her and one for Rafe, who loved steak and all its derivatives and accoutrements.

“Mindfulness.” That was a Buddhist principle she could be said to believe in. Being in the moment and mindful of where she was and what she was doing. Which didn’t keep her from locking her keys in the car shortly before noon on the Thursday after Christmas in downtown Oregonia a block from the theatre company where she and Rafe worked. It was ridiculous. Walking around the car checking the hatch and doors, all the windows up tight, she could see them dangling there, inches away and completely out of reach. She couldn’t even remember what she had been thinking about the moment she jumped out of the car. Whatever it was, it had been engrossing enough to make her forget the keys and ignore the little bell that tinkled whenever you left the keys in the ignition and opened the driver’s door. Go figure.

Beating herself up for being so stupid and thinking she would have to find a hammer somewhere or locate a phone and call a lock guy, she remembered that Rafe had to be somewhere in the theatre complex. He had come down an hour or so before to look at the set design for “Henry the Fifth,” something to do with a fight scene he was going to be in. She had been on the phone with her brother Michael when he left and hadn’t paid much attention.

The New Oregon Repertory Theatre was dark over the holidays, always was between November and February. Lights off, everything locked, she going from door to door, her keys useless in the car. Finally, at the Period Theatre, the outdoor one, she found an unlocked entrance in the surrounding wall. Access through it to the stage and then backstage a doorway and stairs descending to the underground corridor connecting the three venues. Quiet down there, a bit spooky, too, walking along with only the emergency lights on, the place deserted. Where the hell was Rafe? Then she heard a sound, a moan actually, and some kind of movement coming from the prop room. Elisa reached the doorway, paused, and then peered around the corner.

ROSYLAND is available as a trade paperback and as an eBook. The eBook may be purchased through KOBO or AMAZON. Bookstores may order copies of the print edition through Ingram Wholesale. Signed copies of each of my books may be purchased directly from me through Amazon. Click on Buy Now at this website and follow the recipe there provided.