In The Big City 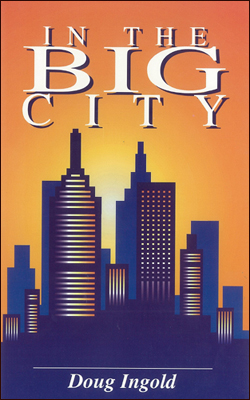 In the Big City is the story of a family in crisis. When Jason and Anne Winter move from rural Carbondale, Illinois to Chicago so Anne can begin her career with a large law firm, Jason finds himself cast in a new roll, that of a stay-at-home-dad caring for Kim their two-year old daughter. While Anne grows into her new and exciting life, Jason is isolated, surrounded by strangers in an impersonal and threatening city. These forces pull them in different directions and threaten to destroy their marriage.

Jason and Anne try to support each other and both want the marriage to succeed. This sometimes funny, sometimes moving novel is about their attempt to survive this dramatic change with their marriage intact.

“A poignant and finely crafted work that deals with the inner and out journeys of one American family in the tumult of Chicago.” The Humboldt Beacon, California

“Definitely worth reading for those who enjoy a good plot and story line without the need for a great deal of violence.” The Daily Sun, Georgia

This excerpt is taken from the IN THE BIG CITY. The novel is set in Chicago. I call this excerpt “Mr. Rogers Gone.”

Copyright 1996 by Douglas A. Ingold

Two uniformed guards stood at the entrance to the discount store. They looked official, done up in blue, fat and bored. Inside, the walls were spotted with convex mirrors and red signs stating that shoplifters would be prosecuted to the fullest extent of the law. High in the corners small cameras scanned the aisles.

It took a long time to locate and then reach the hardware section. Kim wanted to examine everything and somewhere a temptress was pouring caramel over popped corn. I could not find what I wanted. Too much stainless steel grinning at me to see anything clearly.

We approached a clerk, a man who was ripping open cardboard boxes and pouring their contents into the display bins. The one he was tearing apart at that moment contained hundreds of toothbrush racks, each with its little plastic bag taped to the ring, each bag containing four screws. There were so many toothbrush racks in that one box it seemed inconceivable they would ever be sold. I mean, how many homes do not have a toothbrush rack? Or need one?

“Yeah?” The man did not pause. The next box he attacked was brimming with soap trays.

I took out the broken shower head. “My wife broke this this morning when she was taking a shower. The alarm didn’t go off, you see, and she was in a hurry and it broke. I guess she pulled. . . .”

The man grabbed the shower head and took off down the aisle. “It was probably old or something,” I said, lifting Kim and trying to catch up. “You can see it just pulled loose at the joint there.”

The clerk stopped at a bin full of shower heads. He matched up the diameter of the orifice and handed me both the old and a new one.

“Don’t leave that old one lying around here so someone buys it and then comes back bitching to me about shoddy merchandise.” Returning to his boxes the clerk added over his shoulder, “The alarm clocks are in the appliance section.”

“Broads,” the clerk said and bent over to convert another box to trash.

I scooped up my daughter and walked to the checkout counter. I entertained the insane thought that one of the security officers was scrutinizing me. I tried to explain to the cashier how the one shower head was broken and how I had brought it in with me. I even offered to demonstrate but she was busy with the cash register, one of those new ones that buzz and hiss as if it were tabulating the federal deficit. She placed both shower heads in a paper bag and stapled it shut with the receipt on the outside. When we walked out the guard smiled and said hello. I was another good customer with his tightly stapled package.

Daytime was best for finding a good parking place. Spaces two and three car-lengths long were scattered along the block. I pulled into one directly in front of our building. We had stopped for ice cream and half of Kim’s was drying on her chin and T-shirt. I led her up the stairs, careful to keep her from touching anything, unlocked the door and guided her into the bathroom. She stood patient, squinting, and her skin reddened beneath the pressure of the wash cloth. I screwed in the new shower head and tried it out. Good spray, a job completed. Then, on my way out past the bedroom, I noticed that the laundry was on the floor. It trailed from the bed to the door as if someone had grabbed the bottom sheet and pulled it out from under the stack.

She was several steps in front of me. At the sound of my angry voice she began to cry and ran into the living room.

“Come back here. Help me pick this up.” I went after her, swept her up and was turning back toward the bedroom when I noticed that the television stand was empty.

I held my breath and turned in a slow full circle. The two building blocks and the violet crayon were resting on the coffee table. My parents’ clock ticked on the mantel. Everything was normal except that where the television set used to be, our new color television that we had bought with Anne’s first check, there was a hole.

Kim was complaining. She was thirsty and she wanted down.

She continued to fuss but I held her tightly. My heart was pounding at the base of my throat, my scalp contracting against my skull. We went slowly from room to room. I peered into all the closets. I poked at the dark corners with the handle of a broom. No one. Nothing seemed to have changed in any of the rooms. I ran back to the living room half thinking that the TV would be there. I dropped down on the couch with Kim still in my arms. It was gone. It was really gone. Broad daylight.

“We’ve been robbed! The TV. We just got back from the store. You know, the shower head, and the TV is missing.”

“Yes! I think everything else is all right, but the tube is gone. We’ve been robbed!”

“Burglarized,” Anne said, correcting me. “Robbery is when they take it by force or by threat of force.”

She groaned. “I just can’t believe this. You must have not locked the door.”

“I locked it, Anne. Dammit, I remember locking the door. And it was locked when we got back.”

“What about the back door?”

I ran to the back door. It was closed but not locked. “That must be how they got out,” I told her. “It was locked when we left.”

“Well, don’t touch anything. They may want to take fingerprints. Jesus, and no insurance.”

I poured Kim a cup of apple juice. I came back to the phone and picked up the ponderous directory. I felt myself sinking down along the wall until I was sitting on the floor. The sensation was not loss so much as violation. The picture in my mind was the harsh urine-stained stairwell in the housing project where the tourist had been raped. The crazies. I had known they were out there, but until that moment I had considered us secure inside the apartment. The TV had served as a kind of voyeuristic device, a one-way window that allowed me to peer out at them safe and unseen. Now they had stolen the window and had jumped back through the hole. They had disappeared but in a real and fundamental sense they were not gone. What had divided outside from inside and kept us safe no longer existed.

The officer at the police station was not much excited about the burglary. He said he would try to get a unit over there that afternoon to make a report, but if not then, one would be there in the morning.

“I sort of thought you might look around the neighborhood,” I said. “I just returned home a few minutes ago.” “How long were you gone?”

“They were in and out of there five minutes after you left,” the man said. “Your TV has been sold and the bastards are already shooting up what they bought with it.

About an hour later two officers arrived. They were large men with thick necks and heavy thighs bulging from their tight uniforms. Accouterments of capture and death hung from their wide, black belts. Their speech was formal, their features smooth and unsmiling. Their presence charged the room with an aura of contained aggression. Kim sat on my lap, her finger pressed against her lip. The officers collected the information necessary for their report; one seated on the couch asked the questions and wrote down my responses, the other stood legs apart near the doorway.

“Do you think you’ll catch them?”

“Not likely, sir. Though the set may turn up some day. I’ll need the serial number.”

Later, the other, still standing at parade rest, turned his head and looked out the front window. “From where your set was situated, the screen could be seen from the sidewalk across the street. I’d suggest moving your furniture around before getting another.”

It took only a few minutes. The officers had no desire to obtain fingerprints, no sense of pursuit. They behaved more like reporters recording what had happened than participants in an ongoing event.

It was only after they had gone and Kim and I were alone in the apartment with the shades drawn and everything too quiet, that she finally understood.

Amazon
E-book list price $2.99 at The Kindle Bookstore at Amazon.com

Jason’s self-delusions and failures of will are disturbingly familiar. The writing is clean and unforced, the characters convincing, and the plot subtle but compelling… there is an engaging play of intelligence and wit throughout.

… readers will find much of themselves in the struggle, no matter their whereabouts or lifestyles. This is [a] book you will not want to put down, from first page to last.

A lovely book…. A refreshing departure from heavy energy plots and violent action.