I think of Rosyland as a theatrical piece which is why the cover shows a stage and the subtitle is “A novel in III Acts.” I enjoy live theatre and as I was working on Rosyland I noticed that theatrical references kept appearing in the text. Elisa, a central character, is a costume designer with a theatre company in Oregon and her husband is an actor with the company. We follow Elisa to Nevada and California where most of the action takes place, but her mind is never far from the theatre company and the small Oregon community where the company has its home.

Rosyland has many characters but the central character is the story itself. What Elisa says about producing a play, I hope readers will find true of this novel: “It’s like a dream, see. We are leading you into a dream….”

When a novelist has lived long enough almost everything he or she writes becomes a form of historical fiction. SQUARE is a short coming of age novel narrated by a thirteen year-old boy. Set in a small Midwestern town the story describes a series of events that take place on a single day in August, 1953. My goal was to create for the reader a clear and precise experience of a particular place at a particular time involving particular events and the people involved in them.

My second novel, THE HENDERSON MEMORIES, is set in Brazil in 1965 and tells the story of two idealistic young Peace Corps Volunteers who have a difficult time. I began writing it in 2006, forty years after I returned from Peace Corps service in Brazil.

Much of the material I drew from a journal I kept at the time and have lugged around with me all these years through a divorce, a remarriage, the raising of two children and moving into and out of fourteen different residences.

My first novel, IN THE BIG CITY, takes place in Chicago where I once lived with my first wife and my daughter.

But I wrote the novel in California on a manual typewriter while living off the grid in a small cabin. The cabin was located on a flat of land twelve hundred feet above the valley of the Mattole River. In the still, pre-dawn spring mornings, before starting my writing day, I would walk barefoot to the garden to reset the mouse traps and start the watering. The soft gray bodies that I tossed over the fence were devoured noisily by our dog Joe. My feet would be wet from walking through the meadow and the air smelled of pennyroyal.

In Jason Winter’s struggle to adapt to life in Chicago the reader might find some reflection of the disparity between the setting I was living in and the one I felt compelled to write about. 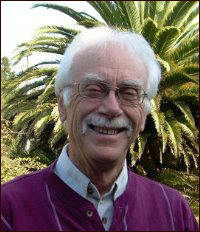 I am the father of two adult children, a daughter and a son, and the mother of five adult novels, though on first inspection, the third, SQUARE, may appear rather child-like. The fifth, THERE CAME A CONTAGION, has finally grown up and will be leaving home soon. Her coming-out party will take place on July 1, 2021. This latest novel was inspired by a vivid memory my wife had of a previous life time.

I was born a long time ago in Peoria, Illinois and grew up in a small town nearby, the son of a factoryworker and a bank teller, though I descend from a long line of Mennonite farmers. I graduated from Washington Community High School. I got a bachelor’s degree from Southern Illinois University in Carbondale and a law degree from the University of Illinois in Champaign. Between Carbondale and Champaign my first wife and I served in the Peace Corps in Brazil.

My first position as a lawyer was with the Legal Aid Bureau in Chicago; then, back in Carbondale, I became the director of the Jackson and Williamson Counties offices of the Land of Lincoln Legal Assistance Foundation. From 1976 through 2019 I maintained a private legal practice in Garberville, California where I was also the part owner of Wolfenden, a publishing company. Since retiring, my wife and I have divided our time between the Redwood Coast of Northern California and the Sunshine Coast of British Columbia.