OUR DAY IN NAPLES

One day we went from Sorrento to Naples, crossing the bay in a ferry. The weather was clear but a strong wind coming off the Mediterranean produced large waves and the old boat bobbed about like a fisherman’s cork. About halfway across a crew member came around with a handful of plastic bags of various shapes and sizes that he offered to anyone who felt the need. This courtesy led me to presume he was probably the poor guy who would have to clean up any messes.

We went to Naples for three reasons: to see a famous Caravaggio painting called “The Seven Works of Mercy” that he painted for a charitable organization while he was in Naples, having fled Rome to escape a murder charge; to visit the Archeological Museum where most of the artistic treasures taken from Pompeii and Herculaneum are housed; and to walk on streets where Lila and Elena grew up. Lila and Elena being the principal characters in Elena Ferrante’s wonderful “Neapolitan Novels.”

Here are a few things our man Rick had to say about Naples: If you are not comfortable with the intensity of Rome, do not go to Naples because Italy “intensifies” as you go south. It is Italy at its best and its worst. Naples is the most densely populated city in Europe with almost no parks or open spaces. It has very high unemployment and lots of crime. But Naples, Rick added, “richly rewards” those who venture in. So we ventured in. 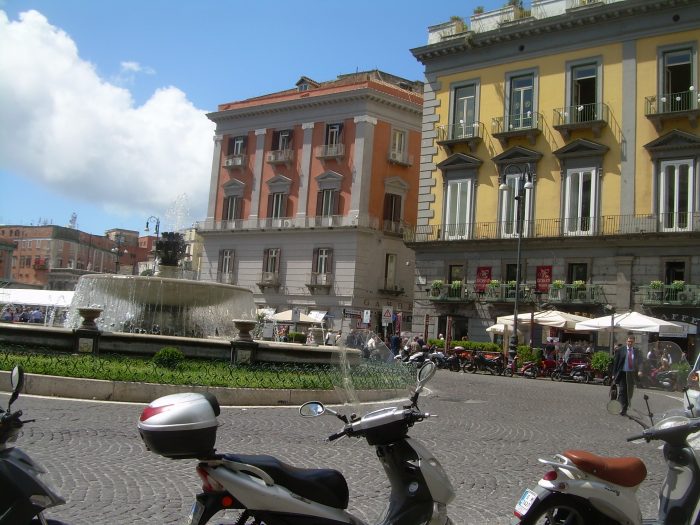 The ferry docked at a busy harbor near several huge cruise ships. From there we hiked a few blocks to a street called Via Toledo, which we found thanks to a woman who managed to give us directions even though she spoke no English and we understood none of her Italian. Via Toledo is on Rick’s walking tour of Naples and we had his map. At its end closest to the harbor Via Toledo is pedestrian only. High-end stores, street musicians, hawkers of all kinds, lots of folks walking along, the occasional car or scooter breaking the law in that slow persistent way that says, “Yes, yes, I know, but I really have to get through… and we all just need to work together on this….”

I had recently read a biography of Caravaggio so I was in a hurry to find a church, Pio Monte della Misericordia, where Caravaggio’s famous painting had been waiting four hundred years for me to stop by and take a look. The church was not on the Via Toledo, not close, but from Via Toledo, apparently, you could get to a street that lead you to a street that….

Then Nina said, “Stop,” and so, of course, I did. She was looking at a poster on the side of a doorway. Inside this building, the poster declared, was a painting by Artemisia Gentleschi. I had barely heard of the name, but Nina had studied her work in art history. She was, I was told, “the” woman painter of the 17th century, gutsy, brave, talented. As a young woman Gentleschi was raped by another painter. She testified at his trial and later did a couple of famous paintings of Judith slaying Holofernes in which the Judith figure is a self portrait, and the guy getting his throat slit is a portrait of the creep who raped her. How’s that for artistic justice!

So, we went in. The building, once a private palace and now an art museum, was gorgeous inside and its rooms were packed with art. We found the Gentleschi. In this painting the woman is Delilah, not Judith. She holds a scissors not a sword and is about to cut off Samson’s hair, not Holofernes’ head. Not surprisingly, Gentleschi was drawn to themes such as these.

I was wondering from room to room when Nina came up and said casually, “Oh, by the way, have you seen the Caravaggio?” I thought she was joking since “the” Caravaggio was in Pio Monte and we were still a long walk from Pio Monte. But I followed her to a small room inside of which there was only one painting: “The Martyrdom of Saint Ursula,” which, so far as anyone knows, is the last painting Caravaggio completed before his short and violent life came to its ragged end.

This painting, as with much of Caravaggio’s work, is dark and dense with figures and drama. It is as if the action were taking place in a darkened room illuminated by a strobe. Silvery light glints off armor and weaponry and flesh. You see red in the fabric of Ursula’s robe and in her killer’s clothing. There is the armor-covered arm of the soldier holding her, the reaching hand of her maid seeking to protect her, the face of Ursula looking down at her own hands touching above her heart. Behind Ursula, and bathed in a slightly more yellowish tone of light, is the face of a man. The man may be trying to look over her shoulder to see what is happening, or he may be gazing toward the unseen, toward heaven perhaps. That face, it is said, is the face of Caravaggio.

Accessible, mounted alone in its small room, the painting struck us more deeply than the larger more complex, more famous painting at Pio Monte della Misericordia that we saw later that day. “The Seven Works of Mercy” is set at the back of an alter ten or more yards from where you stand. The painting is like a puzzle, and your task is to figure out how the seven acts of mercy are represented: bury the dead, visit the imprisoned, feed the hungry, clothe the naked, shelter the homeless, visit the sick, give drink to the thirsty. It is all there plus an angel with magnificent wings looking down from on high but it helps if you have a diagram or stick a Euro in a little machine that projects onto a screen the various scenes in the larger painting.

We left Pio Monte and made our way to the Archeological Museum. By this point we had walked several miles, and after touring through its floors of amazing mosaics, sculptures etc. taken from the ruins at Pompeii and Herculaneum we were pooped. It was too far back to the ferry so we decided to ride the subway to the central train station where we could get a commuter train back to Sorrento. 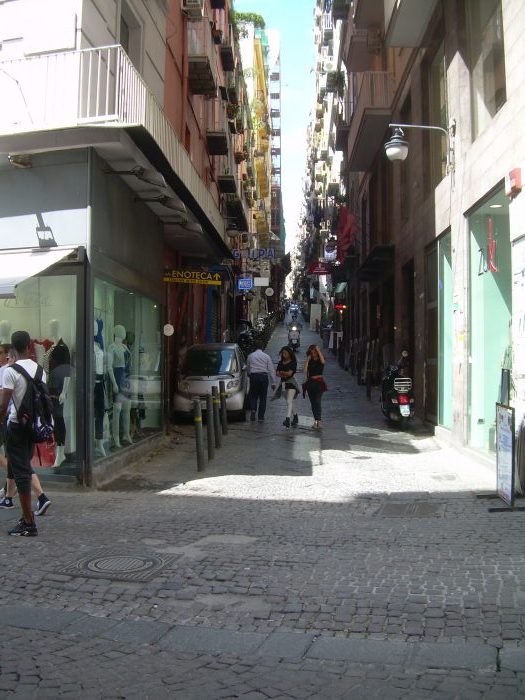 We found a metro stop, bought tickets and descended into the underground where we encountered a labyrinth of passages, stairs and tracks running on different levels and in different directions. There were signs and arrows but they seemed to contradict one other. I remembered what Rick had written about crime in Naples: be wary especially around train and bus stations.

We asked two men for directions. It was not comforting that they immediately got into an argument. The men were African and whatever language they were arguing in was not one we had heard before. Finally, one of them said in something like English: “Come with me.” In exchange for that sliver of our native tongue, we gave a sliver of trust even though the other man was aggressively shaking his head no.

This, it turned out, was a mistake. Our man was, we believe, trying to help but he knew just enough English to be dangerous, though not enough to understand where we wanted to go. He led us down several flights of stairs to a train that so far as we could guess was headed away from the central station, not toward it.

Stations stops were called out as the train sped along and we could tell from our map that we were getting farther and farther from the central station. A woman seated a few seats away seemed to be looking at us with concern. Finally, we jumped off and caught a packed train going in the opposite direction. More confusion pestered us at the central station but eventually we found and took the long, slow, crowded, rattling commute back to Sorrento.

When we finally did arrive in Sorrento it felt like home. At a small outdoor establishment downtown we had large bowls of minestrone and met an American woman and her son. She lived in Chicago. He was teaching in China and they had rendezvoused in Italy for a vacation. The minestrone was delicious.