In the Germanic countries (Austria and Germany) we were among acquaintances and family. My first visit to Lofer, Austria was in 1983 and my wife Nina had been there with her parents years before that. In 1999 Nina and our son lived there for six weeks. Ahry attended school and learned to ski. One of the boys who befriended him later visited us in Miranda. I have been to Lofer six or seven times and Nina a dozen or more. For a while she led a travel program that took people to Lofer.

The village is located southwest of Salzburg in the valley of the Saalach River 626 meters above the level of the sea and enclosed by a wall of steep rugged mountains. We have become accustomed to the ninety-two times the church bells clang at seven every morning a few yards from our room. (No rest in Lofer for the wicked or for anyone else.)

We attended Claudia’s wedding three years ago and this year met her baby. (Before dawn on the morning of the wedding a cannon was fired several times sending explosions of sound rolling through the valley.) The birth was difficult, we learned, threatening the lives of both mother and son but now the mother looked great and the little guy seemed to be bursting with vitality as he waved his arms and emitted deep-throated shouts from the stroller.

We also learned this year that Nina’s friend and Ahry’s favorite teacher had died at the age of 47.

We once attended an Easter service in the village church and got to see the beautiful laden baskets that parishioners bring to set before the alter. Another year we walked in a religious procession that began at the church and passed through the village. The procession included a band and, it seemed, most everyone in town. The local priest walked beneath a canopy. Like many of the participants, the men holding the canopy over his head wore traditional dress. While the band played outside a home for disabled seniors, some cows broke through a fence and came galloping through the crowd.

We buy schnapps, butter and preserves from a woman farmer. I have ridden bike paths to neighboring villages and early one spring we tried snowshoeing. We peer longingly through shop windows. We take ski-lifts up to the Lofer Alm where in winter there is skiing and in spring and summer you can hike on the roads and paths through wild flowers and then have lunch on the deck of a restaurant with views that go on forever. At that altitude sound seems to carry a great distance. This year we heard cuckoo birds calling from distant clumps of trees, their song clear, bell-like. 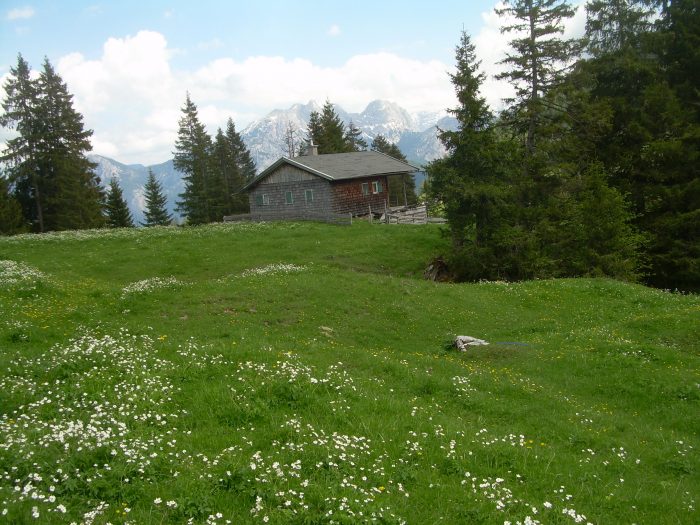 We have a favorite place we stay, Haus Edelweiss. Our room has a small kitchen and is beautifully decorated. We know the parents who own it and their daughter and her husband. (Drizzly weather, the mother Frau Faistauer, claims is “anti-wrinkle” weather. You should go out and walk in it and let it splash on your face.) Across from the front yard is a pasture in which two red oxen with huge horns scratch themselves on posts and trees. We have people we reconnect with, restaurants we return to, rivers we walk along, hikes we take. We have spotted chamois on the steep mountain sides, watched large brown trout feeding in mountain streams, their tails twitching, and seen European dipper birds bounce up and down on rocks and walk beneath the surface of the water as they gather food. On each visit we look to see what has changed and what has stayed the same in this traditional and yet prosperous-looking community.

One evening this year we enjoyed a fierce thunderstorm with dramatic streaks of lightning. It rained and hailed, thunder boomed and echoed off the mountains. The mountains themselves appeared and disappeared and appeared again as dark clouds roiled above and through the valley. It was easy to see how people could locate their gods in the mountains and imagine them clutching in their fists jagged bolts of lightning.

This year, for the first time, we were in Lofer the weekend of the annual “kanu” races. This was the 25th year for the slalom kayak races in the Saalach River. The river as it passes through town is thick with large boulders, some of them beneath the surface, others partially above. The water is cold, white and rushing. Along the course of the race twenty or more gates are hung above the water. The gates consist of two metal poles perhaps a meter apart with their tips a foot or more about the water. Most are above rapids but a few are located above swirling eddies a few feet downstream from a boulder and these must be passed through while moving upstream.

The races are time trials, one racer following another thirty or so seconds apart. Officials stand on shore beside each gate to judge whether the person passed through the gate successfully, touched it on the way through or missed it entirely. (To touch a gate costs the racer two seconds, to miss costs fifty seconds, and since a skilled racer can complete the course in just over two minutes, a missed gate effectively eliminates one from that race.) 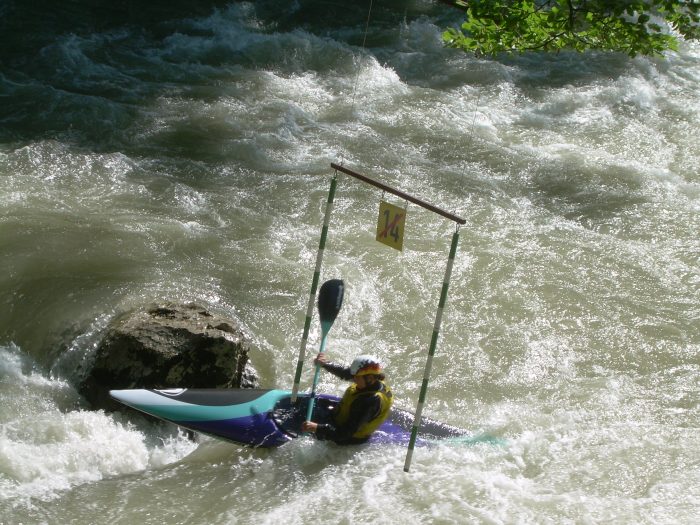 Kayaker passes through a gate

Positioned here and there on the taller boulder are rescuers. These folks are tethered by ropes tied around their waists, the other ends of which are held by colleagues on shore. Like the racers they wear helmets. If a kayak capsizes rescuers dive into the water to rescue the racer, the kayak and the paddle. We saw this happen several times.

Over two hundred racers from various parts of Germany and Austria competed this year. They were young, both men and women, and they competed in different categories and levels. The course is physically demanding. It requires skill, daring and a willingness to risk comfort and personal safety.

As is often true, the very good are noticeably different from the rest of us. They seem to expend less effort, they use the force of the water to their advantage, they are fast but seemingly unhurried. One challenging “reverse” gate was revealing. Most racers rushed past it by ten feet or more before they could turn and battle their way back. But the very best seemed to reverse direction right at the gate, pass through it and then turning again catch the downward rush of water. One can pass through a gate sideways so long as the racer is going in the right direction because the kayak will pass beneath the poles without touching but the head and shoulders of the racer must pass between the poles with the paddle held in such a way as to not touch them. A tricky bit of business that is.

We were in Lofer seven days. On the morning we left, Veronica woke us at five-fifteen. We reached the bus stop before six where we joined a cluster of students who were solemn and silent and on their way to Salzburg for a day of study. The bus was on time and we were well out of town before the church bells began to ring.

Posted in Travel | | Tagged a, Austria, Lofer | | Leave a comment