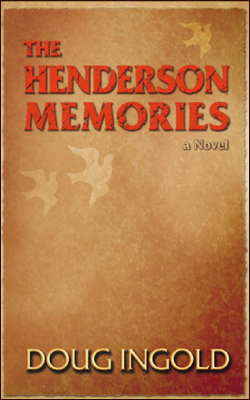 Hear the drums, Take the journey. The Henderson Memories is a story of idealism and loss, of passions felt and lessons learned.

In 1965 two young American Peace Corps Volunteers arrived at a small town in the Brazilian state of Bahia. Kyle and Jolene Henderson were determined to confront the poverty and social inequality surrounding them, but a few months later the Hendersons suddenly left Brazil. They returned to the States, established careers, raised a family and eventually died, having never spoken to their children of Brazil or the Peace Corps. What happened to the Hendersons in Brazil? Daughter Connie Scheel thinks Clint Estergard knows the answers and she flies to Vancouver, B.C. hoping to get them. But Professor Estergard has a tale to tell, and he’s going to insist on telling it his way. The Henderson Memories is a story of idealism and loss, of passions felt and lessons learned.

What follows is an excerpt from THE HENDERSON MEMORIES taken from the chapter titled ALONE. It is a portion of a journal entry written by one of the characters Kyle Henderson on Thursday March 4, 1965. Kyle and Jolene Henderson have arrived in Nova Santana, a town in the Brazilian State of Bahia, where they intend to live and work as Peace Corps Volunteers.

Copyright 2010 by Douglas A. Ingold

I sometimes have the sense as I walk through the town that Jo and I have woken up to find ourselves characters in a movie that started long before we arrived. Everyone else has established their roles and are deeply involved in their stories. They look at us and no one is quite sure what parts we are here to play. Their first response has been to welcome us. Brazilians are very gracious, hospitable people. The principal at the high school had us to dinner. We hold our evening English classes in one of his classrooms. The mayor’s family invited us for lunch. We met his wife and children. We attended a birthday party given for a local doctor, though not the one who runs the clinic where we are supposed to work. The hors ‘d oeuvres were delicious. I feel us being passed around among the town’s elite as if we were some novelty, a curiosity discovered one day in the street.

Our central problem though is the Posto de Saúde, the health clinic. Someone, the mayor, the doctor, a member of the state’s health department, someone, accepted an offer from the Peace Corps to have us work at the clinic here in Nova. It was all hastily done, this setting up a program in Bahia, you can bet on that. That’s the way the PC works. Some bureaucrat decided they should move into Bahia. They found a man in the States to direct the project. He had to extract himself from his job and move himself and his family down here. In the meantime they sent Willie and one or two other veteran Volunteers up to Bahia to find duty stations for us, the newly arriving Volunteers.

I can imagine the scene. Willie blows into town on a bus or in a Jeep. He meets a few of the local dignitaries. Explains how these bright young Americans want to live and work in your town. And they’ve been trained, he tells them. They are, even now, getting more training in Ilheus. Won’t cost you a penny. Sound good? They come in single and double sizes. How many can you take, one, two? I got a husband and wife combination I can let you have. And for a clincher he probably threw around the name of John Kennedy, a good Catholic boy, who is wildy popular in Brazil.

So here we are.

Only the people at the Posto de Saúde were not prepared for us. They have no idea what to do with us. When we walk in the door, the staff members stop their work and greet us. They find us chairs and bring us cafezinhos….

And we are encouraged to sit there and, and what? Smile? Drink the coffee? Hold the occasional crying infant so the mother can get some help for another sick child? The sense is they don’t want to inconvenience us. At first we were celebrities to be set in chairs and looked after. But now our celebrity status has worn thin. We’re beginning to look a little dusty and chipped, like statues of old gods no longer worshiped. We’ve become a bit of an embarrassment, I suspect, especially now that we’ve made clear we actually want to do something.

Then there is Doctor Nascimento, the man in charge of the Posto. The doctor is always friendly, back-slapping, hand squeezing, eager to see us. But he is seldom there, and when he is, he spends much of his time talking to us. The idea, his idea, is that by engaging us in conversation, our Portuguese will improve and we will be of more use. But when he is talking to us, he is doing nothing for the crowds of patients waiting to see him. So not only are we not performing any service, we are a hindrance. We take up chairs, we drink the coffee, we use up staff time and the doctor chats with us while the patients get sicker. It’s very painful. We came to be of use but find ourselves in the role of guests who have overstayed their welcome, a burden more than a help.

Amazon
E-book list price $9.75 at The Kindle Bookstore at Amazon.com

“Don’t peek at the ending; it’s worth the wait and you will enjoy every page on the way, especially the book’s final, haunting image.” Kindle review

“The author must have experienced some of this story to write it so convincingly.” Kindle Review