Sorrento on the southwest tip of the Bay of Naples sits on old ground, which is to say you can find steps and bits of wall there that the Greeks constructed in the fifth century BC. The name Sorrento may come from the Greek word for the sirens Homer described in the Odyssey. It is famous for its lemons and its proximity to spectacular sights such as Pompeii, Herculaneum, the island of Capri, the Amalfi coast and of course Naples itself. If you enjoy NASCAR you could spend all of your time in Sorrento just watching the traffic. Nowhere in Italy did we find young men and women on motor scooters so adept and daring. If the law of averages applied in Sorrento, the Via Capo would be littered with bodies and trashed vehicles.

We arrived at the Naples airport midday on a Monday early in May, having flown from Frankfurt with a change in Munich. The good folks at Hotel Desiree (more a B&B than a hotel) had emailed the correct bus number that would take us to Sorrento and we found it waiting dutifully outside. The driver was a handsome, unflappable fellow with the requisite aviator shades and the butt of a cigar that he never lit and that never left his mouth. His driving would make a choreographer jealous. As usual, it was just the three of us: Nina, myself and Rick Steves (in book form). Rick speaks volumes but only when asked, and he does it quietly and with good humor.

That night Rick suggested we eat at the Ristorante Delfino which is located as one might suspect at the end of something, in this case at the end of the pier on Marina Grande, which according to the map seemed to be almost directly below our highly perched bed and breakfast. Unfortunately, as we learned, there was no direct route from our room to the restaurant though there were several indirect wrong ones, a couple of which we tried.

As anyone who has traveled on one’s own in a foreign country can testify, one of the constants is that you are almost always doing things for the first time while struggling with customs and languages that are unfamiliar. As a result you accomplish little and are often lost and confused. The benefit is that a simple accomplishment, like locating a restaurant at the end of a pier, finding it open and being led to a table by a welcoming host, brings an absurd rush of pleasure.

In this case, the family of owners was entertaining, the food and ambiance wonderful. We shared an antipasto of mussels and clams drenched in garlic followed by a grilled sea bass that a young man in black slacks, a white shirt and a black apron carefully and proudly filleted at our table. Because we had Rick along we each received a complementary and delicious limoncello, a liquor served chilled and made from the famous (and huge) local lemons. Last came the obligatory chocolate, coffee and hazelnut gelato (we were in Italy after all). As we were leaving the mother who took our Euros slid into our palms small metal images depicting the Virgin Mary (we were in Italy after all).

On our long climb back to the hotel we bought a bottle of red wine for 28 Euros and a small bottle of the mysterious limoncello to take to our room. The wine was the most expensive and the worst tasting of any we had in Europe and the liquor disgustingly sweet. How could that stuff at the restaurant have been so delicious and this so awful? Still lost and confused.

Photo of art on a wall in Herculaneum 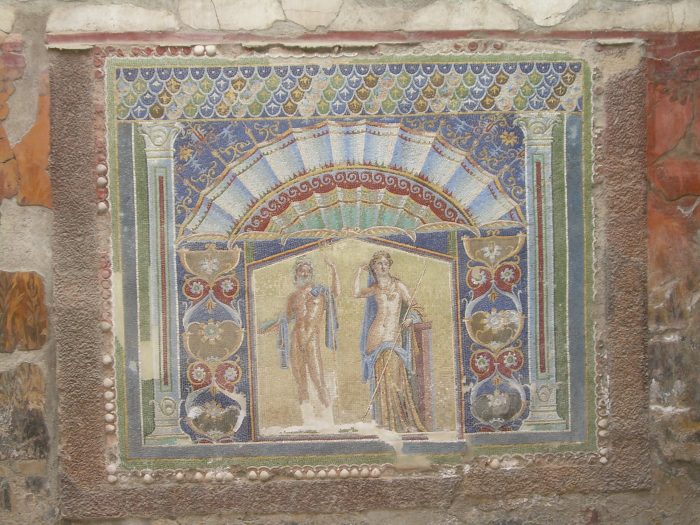